And much more. Library capsules always provide new concepts for use in your capsules; depending on their functionality, they might also provide actions, dialog, and training.

To use a library capsule, it must be imported. In your capsule.bxb file, include an import statement in the capsule-imports block that specifies an alias with the as key and the currently recommended version of the capsule with the version key. (The current version is always given on the library capsule versions list; see Importing Capsule Versions for more information.)

After importing viv.time, you can use concepts and actions defined by the library capsule. To access them, use the namespace prefix specified by the as key when referring to them: in this example, time.Date, time.DateInterval, and so on. A hotel reservation structure with a property indicating the date range for the reservation could use time.DateInterval for that property type:

While you can use concepts in library capsules directly, it's good practice to create new concepts in your capsule and assign them roles of library concepts. In addition to letting you give concepts names more specific to your use case when appropriate, this also gives your use of the library concept a level of abstraction. The Space Resorts sample capsule uses its own DateInterval concept which is simply given a role-of the corresponding concept in the DateTime library:

Space Resorts uses this in the Item structure, which is similar to the example Reservation model shown above. This is just like any other structure in Bixby's modeling language.

By using its own DateInterval rather than referring directly to time.DateInterval, a future version of the Space Resorts capsule could extend the library concept and add new properties, or even replace it with an entirely custom DateInterval model.

Extending time.DateInterval would look very similar to the previous example with role-of, simply using the extends keyword instead:

By extending the concept, you could add your own properties to it, such as a length of stay that could be populated with a separate action via lazy-source and stored with the viv.time.PeriodDays primitive (used in the viv.time.Period structure).

Capsules import their own dependencies; your capsule does not need to import these separately.

When capsules provide dialog, you might want to override their prompts to be more specific for your capsule's use case. In order to do this, you'll need to provide a match pattern that matches the library capsule'a dialog but contains at least one model (concept or action) unique to your capsule. That way, your match pattern is more specific than the match patterns contained in the library, and will be chosen as the "best" match pattern for that use case when Bixby's planner dynamically generates its programs.

For example, if you're trying to override dialog for an address prompt coming from viv.self, you might try:

Because this wildcard match is defined within example.library:

This behavior can be changed with the allow-wildcard-matches-on-imported-resources runtime flag.

If you're having trouble overriding library dialog, the debug console in Bixby Developer Studio can help. Try a query that produces the dialog you're trying to override and examine the planner output to see what models you'll need to specify in your match pattern.

Library capsules can use restrict concepts and actions a consumer capsule can use for matchable resources such as views, dialogs, and strategies.

You should use the most current recommended version for imported library capsules. Bixby Developer Studio's Quick Fix feature shows obsolete library capsule versions as warnings and offers to update them for you.

Instead of indicating a version for each imported capsule, once you import a library, you should use version-from to transitively import any of its dependencies. This is useful in order to keep versions aligned and prevent your capsule dependency chain from using two different versions of the same imported capsule.

Because of the transitive nature of version-from, you only have to point to a capsule that indirectly imports that capsule. 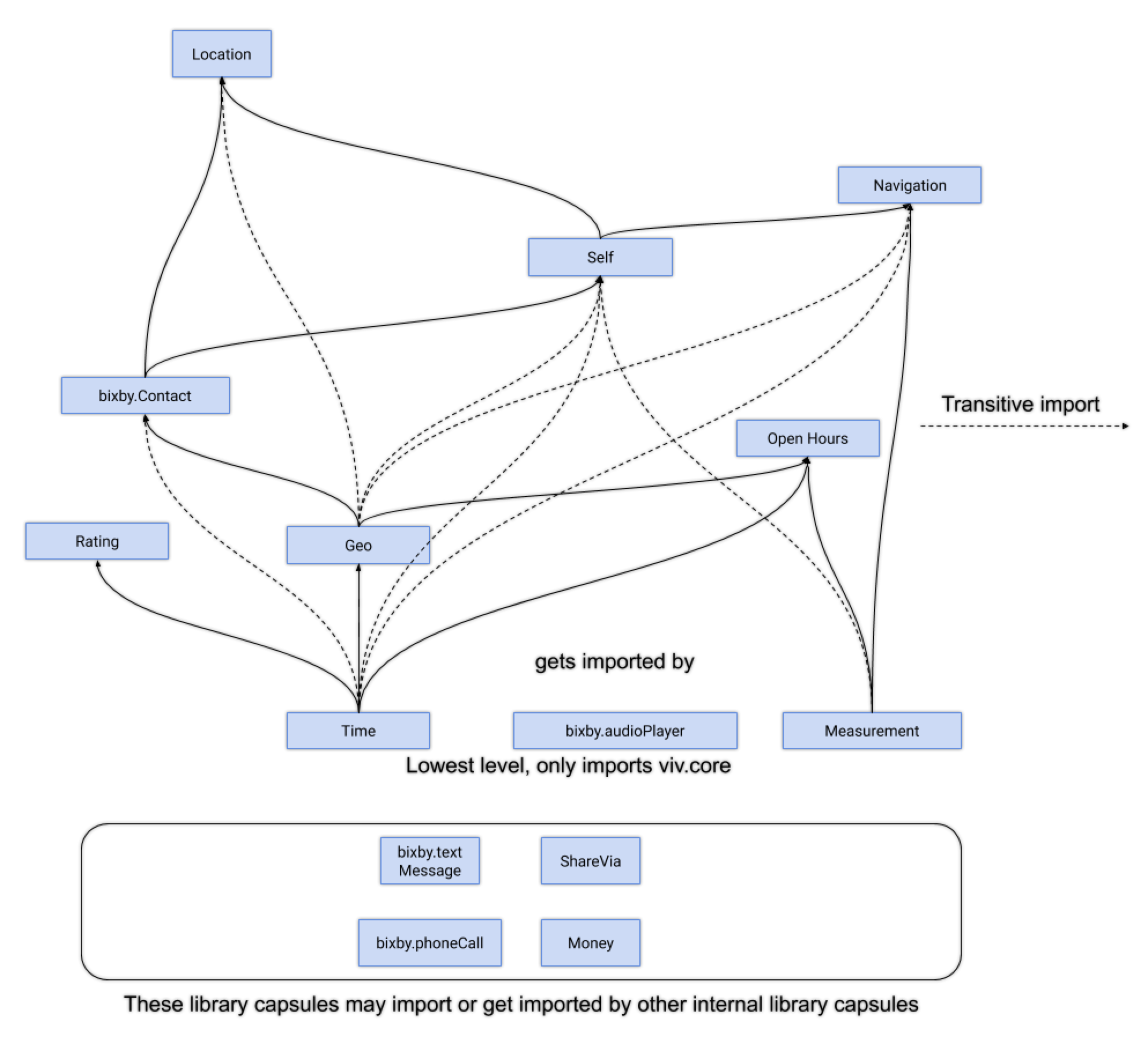 The dotted lines in the diagram indicate possible transitive imports. Note that the following library capsules can import or be imported by other internal library capsules:

In the example below, the capsule first specifies the version when importing viv.location. It then uses location to get capsule versions for other imported capsules.

For a list of commonly used library capsules along with links to their documentation, consult the Library Capsules List.