Welcome to v7.8.1, the 19X release of Bixby Developer Studio. This patch release contains bug fixes and performance improvements. Notably, we changed the behavior of on-demand interpreter training. You must now fix capsule errors before training an interpreter from the Simulator or from Stories.

Welcome to v7.8.0, the 19W release of Bixby Developer Studio. This release introduces a few new geo locations for the Simulator, as well as a keyboard shortcut to open and close the bottom panel.

We've added new locations for Frankfurt and Berlin in the Simulator. 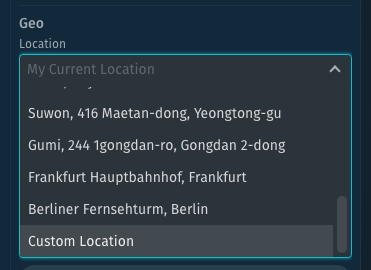 We've added a shortcut to open and close the bottom panel, for example the Warnings & Errors panel. 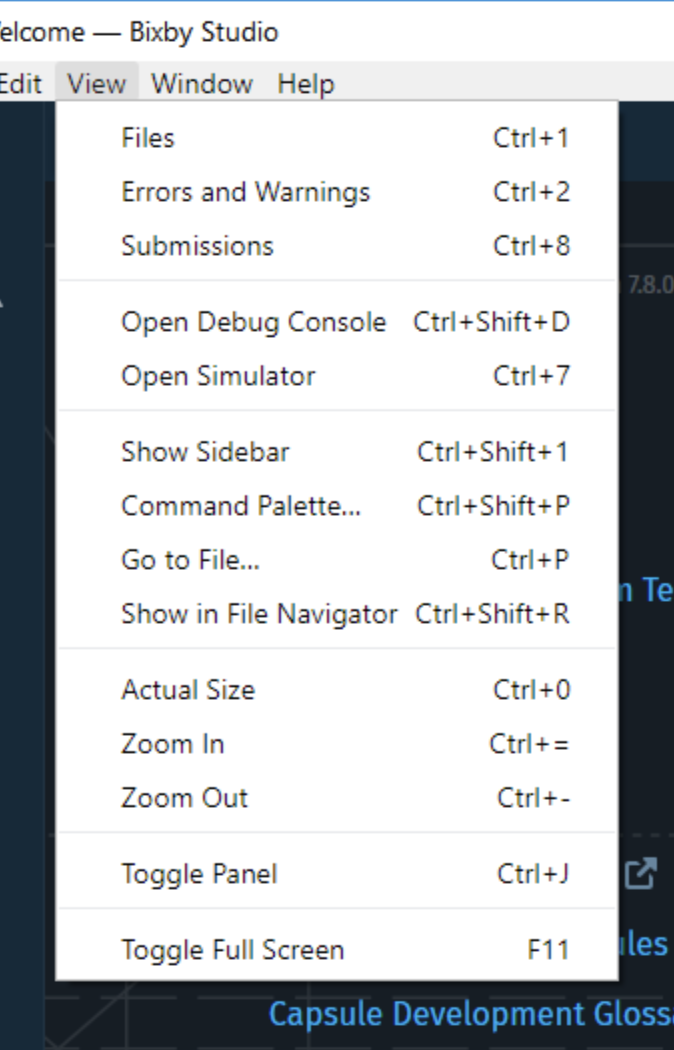 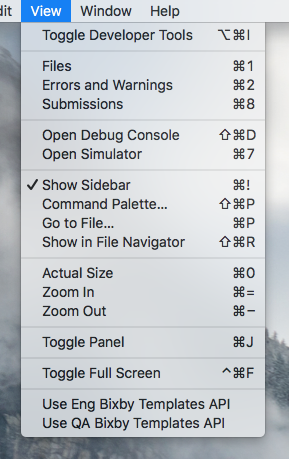 Welcome to v7.7.0, the 19V release of Bixby Developer Studio. This release introduces the new Warnings & Errors panel and the aligned NL syntax highlighter in the Simulator. We've also changed the default and minimum sizes of all windows, and made some updates to the way we handle file changes. 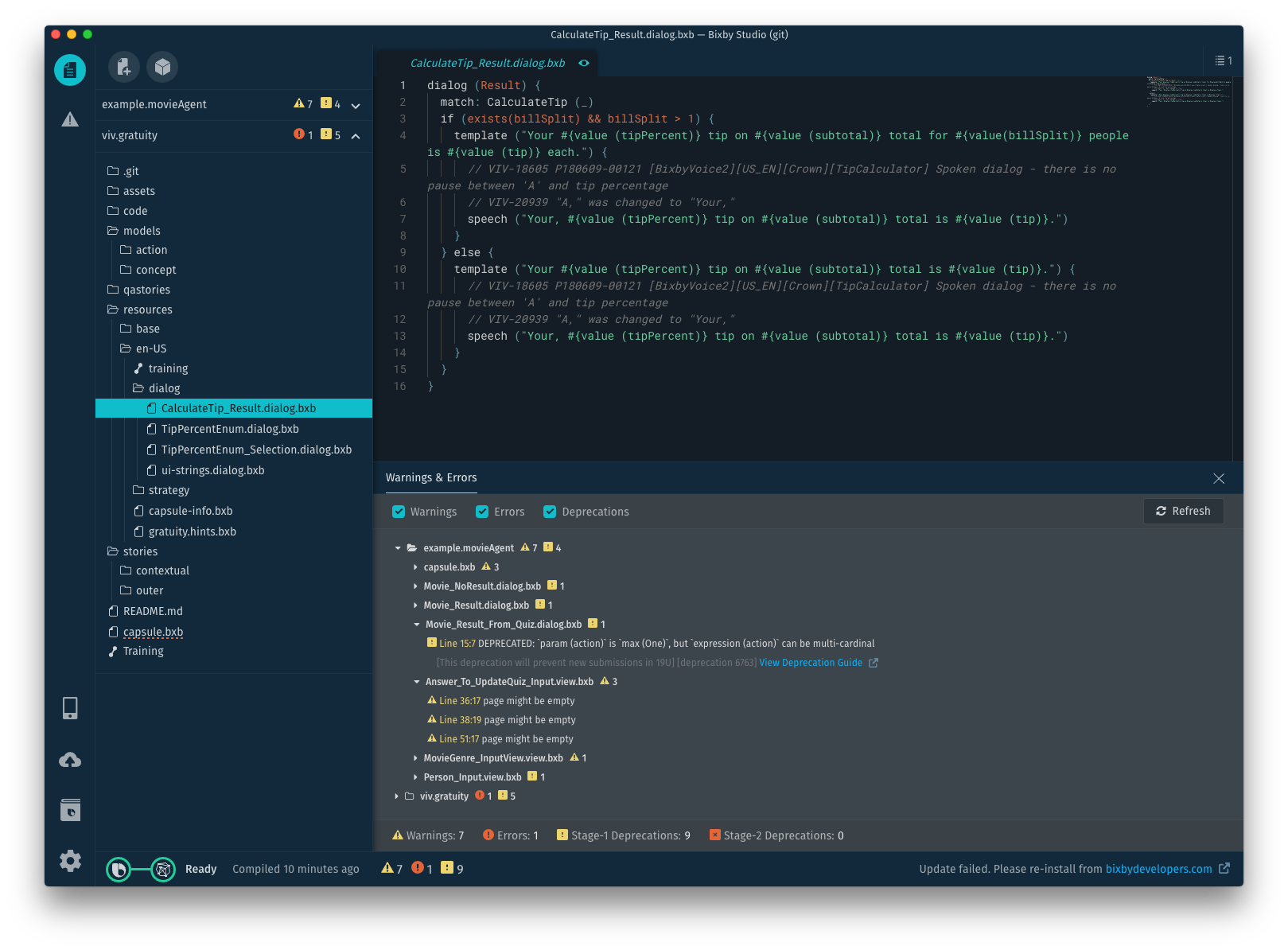 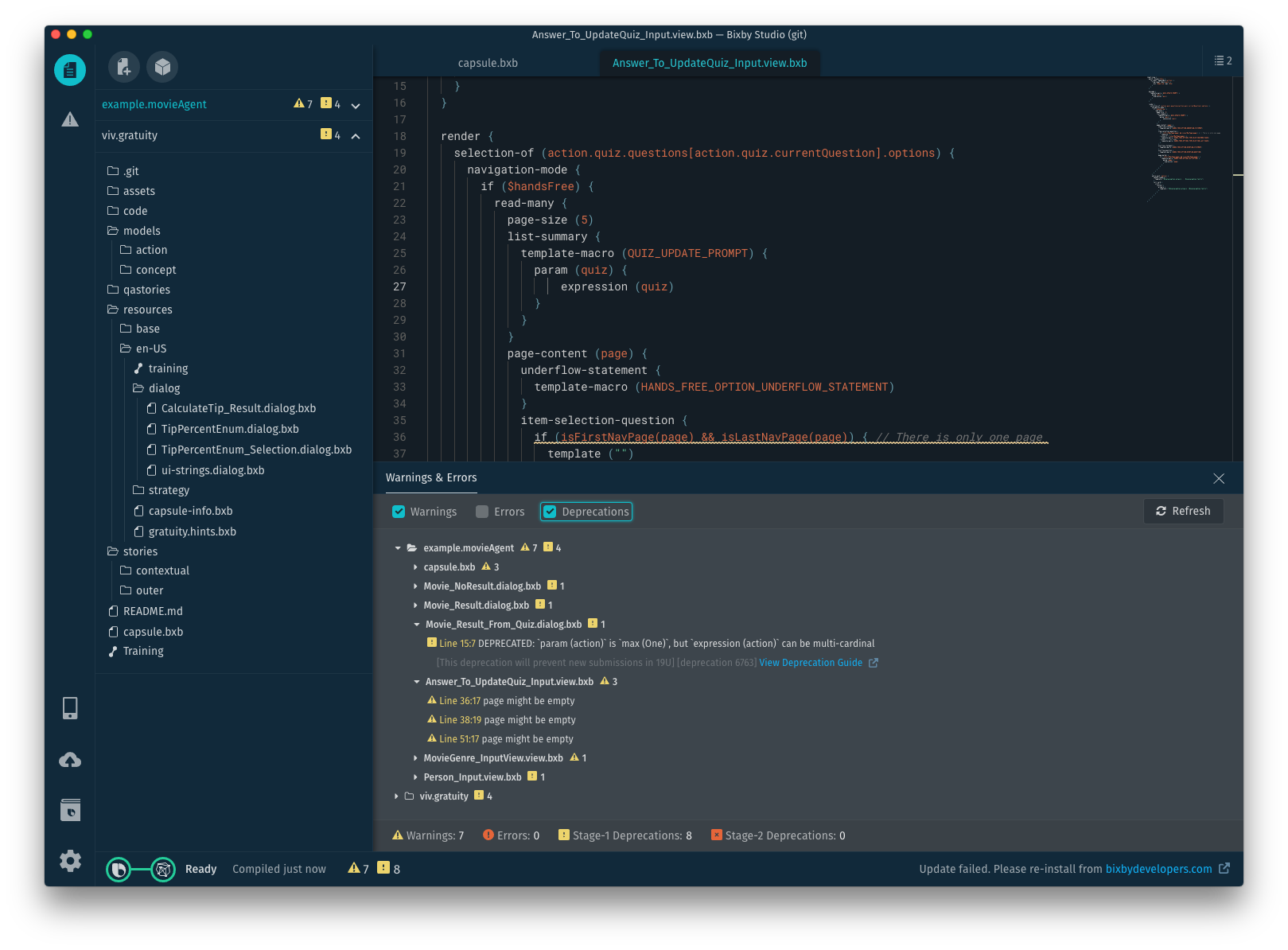 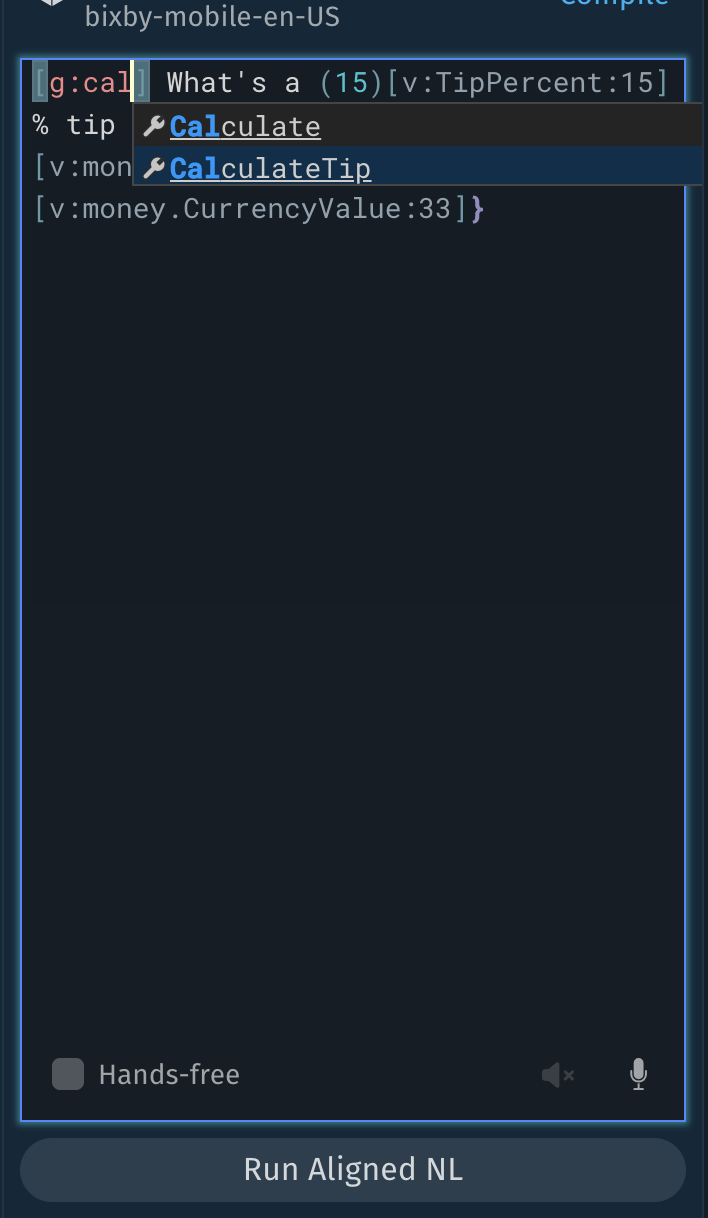 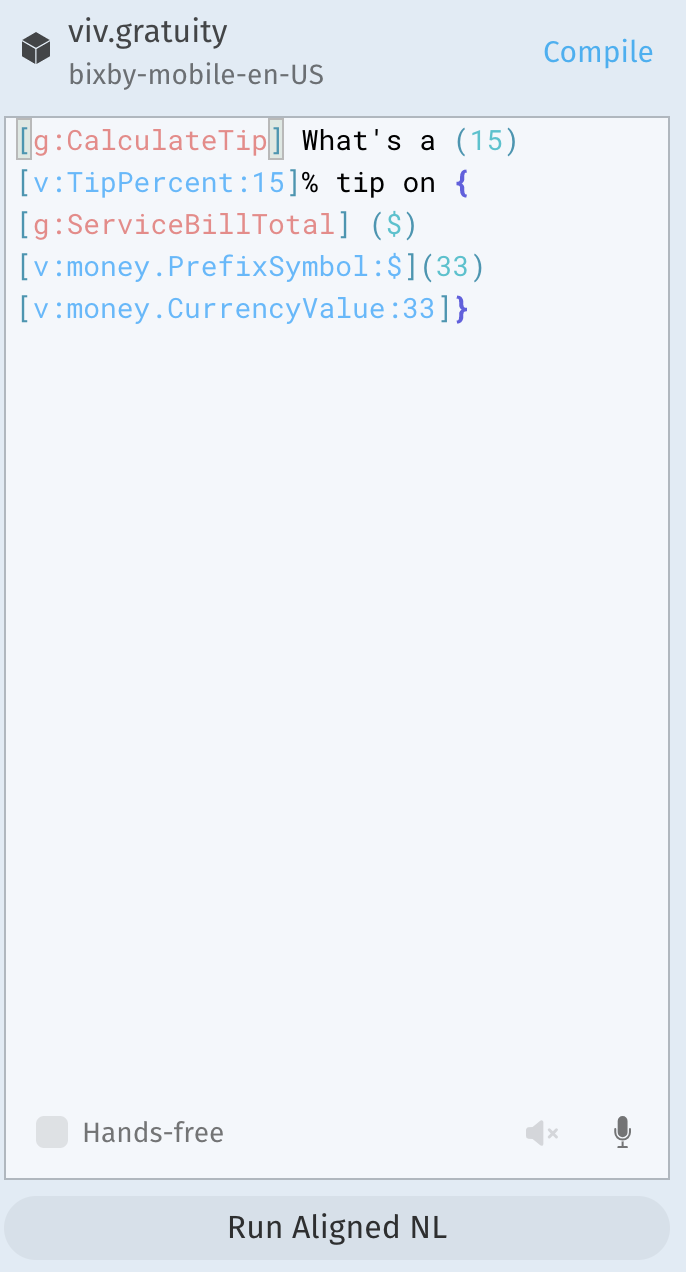 Size of the Simulator and Debug Console Windows

Welcome to v7.6.0, the 19U release of Bixby Developer Studio. This release includes the new Bixby Templates feature and a few bug fixes.

The new Bixby Templates feature makes capsule creation even easier. There are a number of templates to choose from, and creating a capsule this way provides you with a working capsule, with all the required files, which you can quickly improve upon. 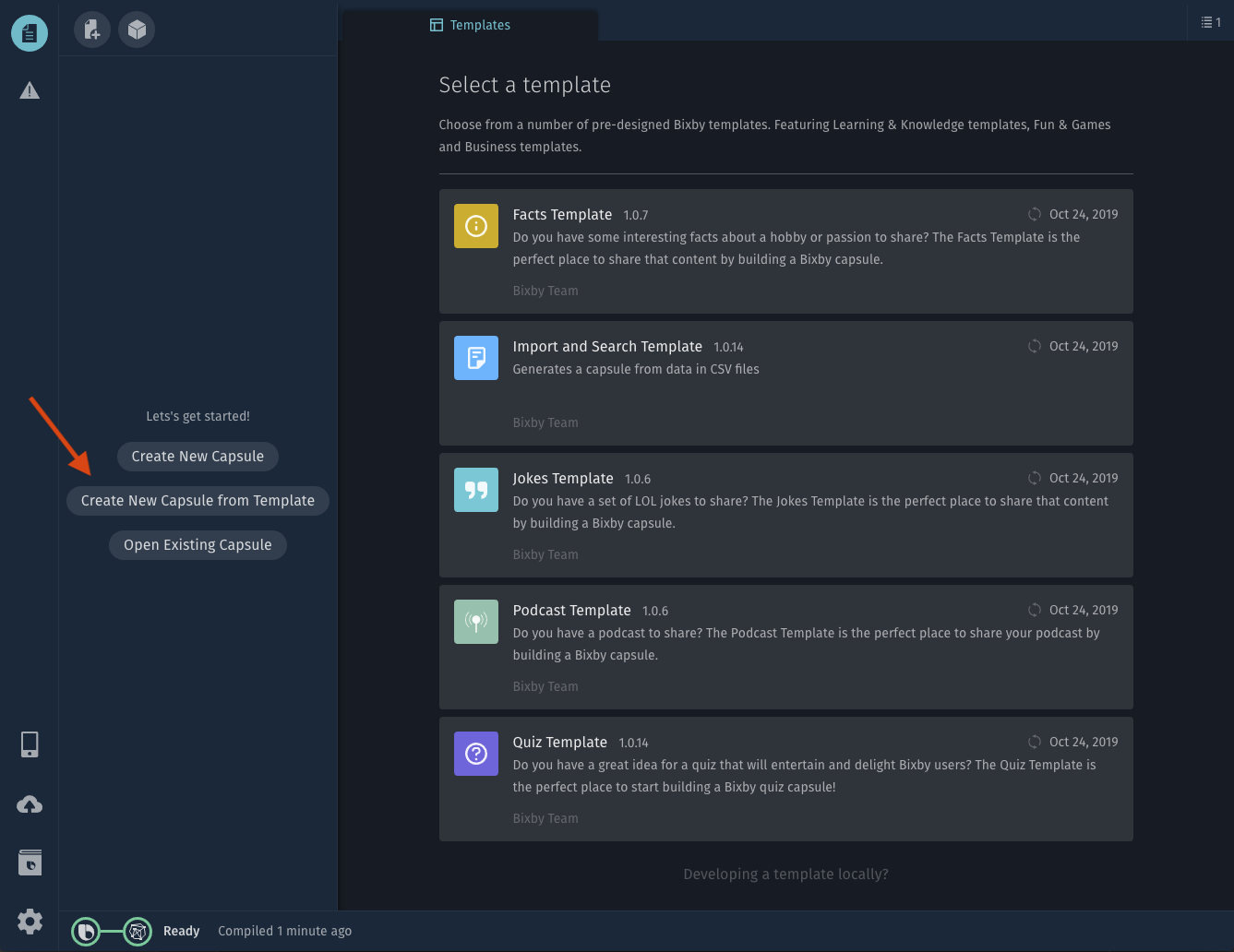 The Simulator now supports additional device types that you can target in your capsule.bxb file under targets. The new device types are bixby-fridge, bixby-tv, and bixby-watch. These device types are testable within Bixby Studio, but are not yet supported in the Marketplace. Read more about Simulating Other Devices in the Simulator. 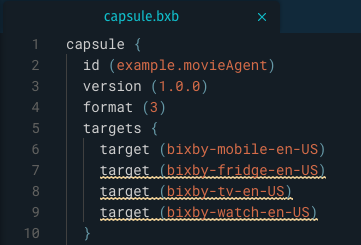 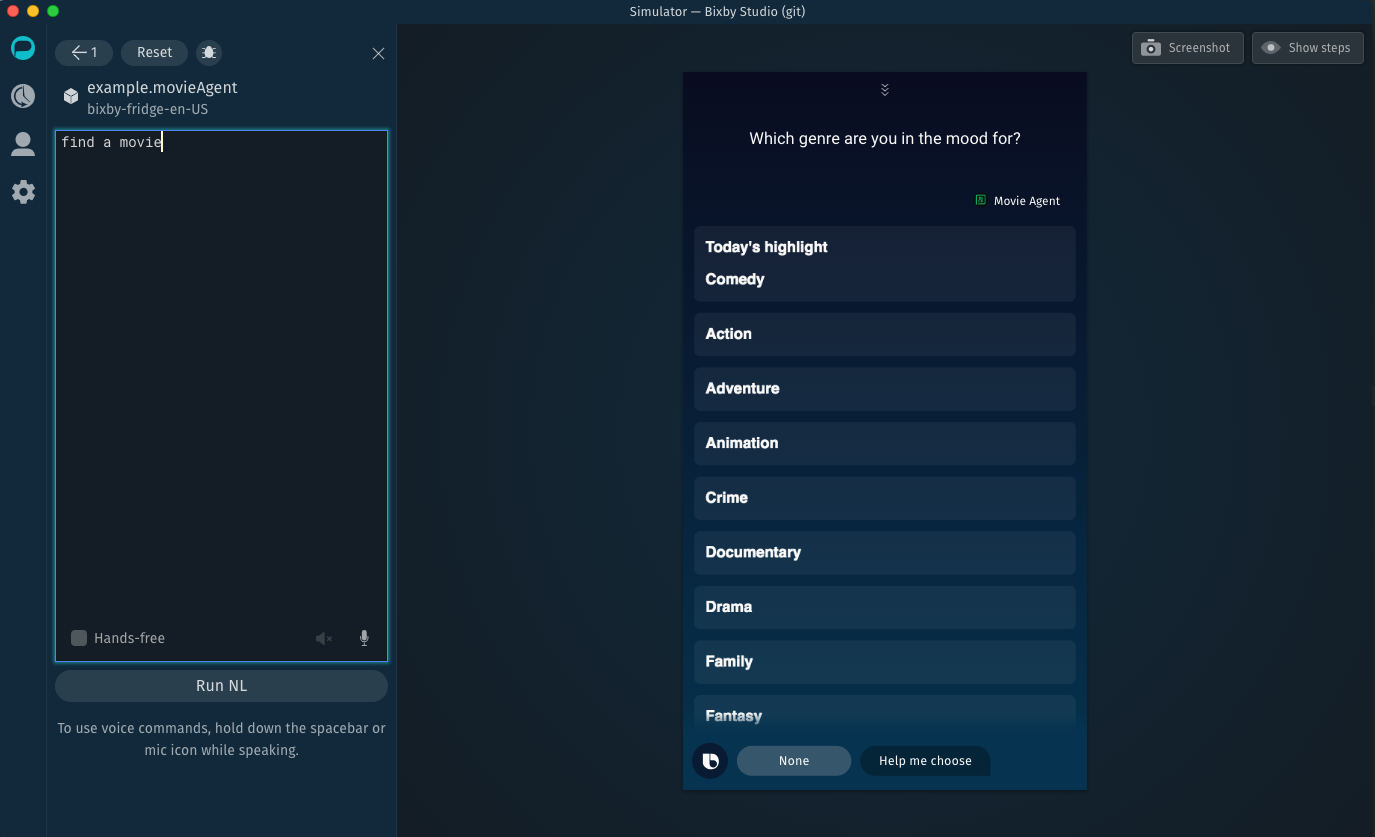 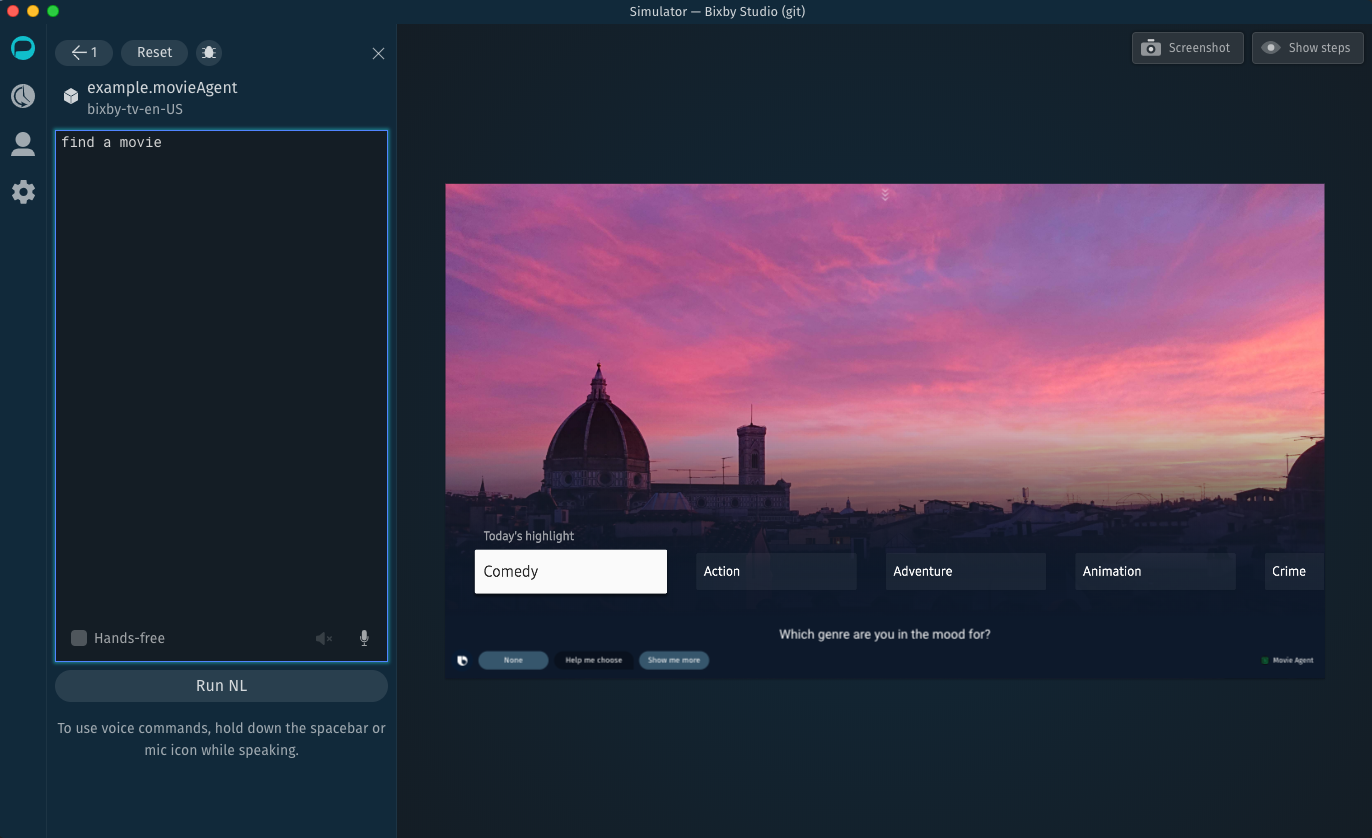 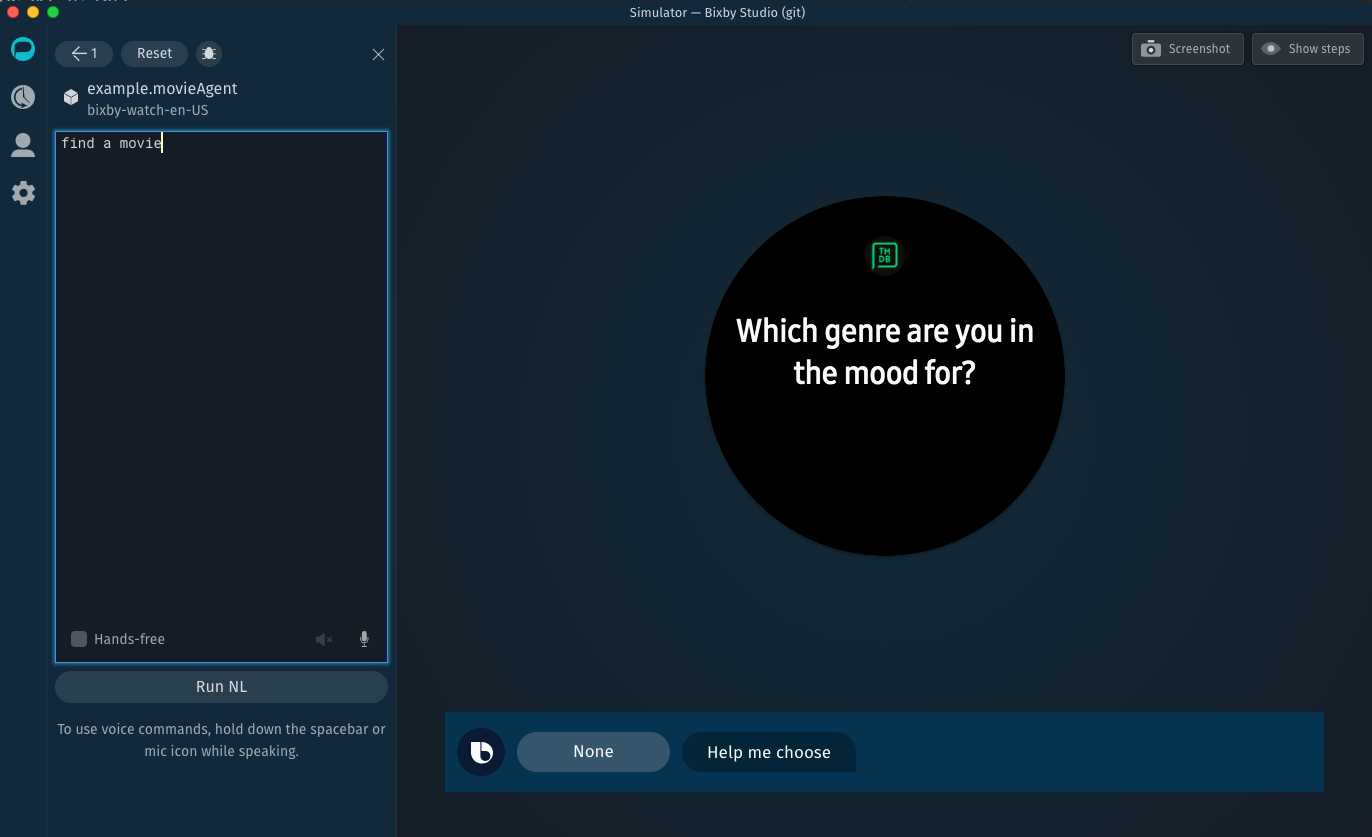 Bixby Studio now supports the addition of a top-level legal.bxb file for each capsule that provides country-specific legal agreements. 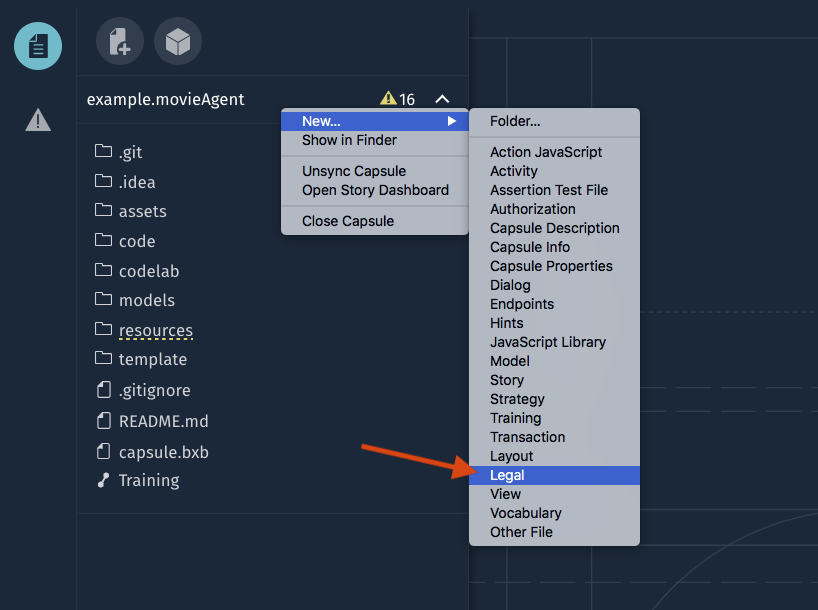 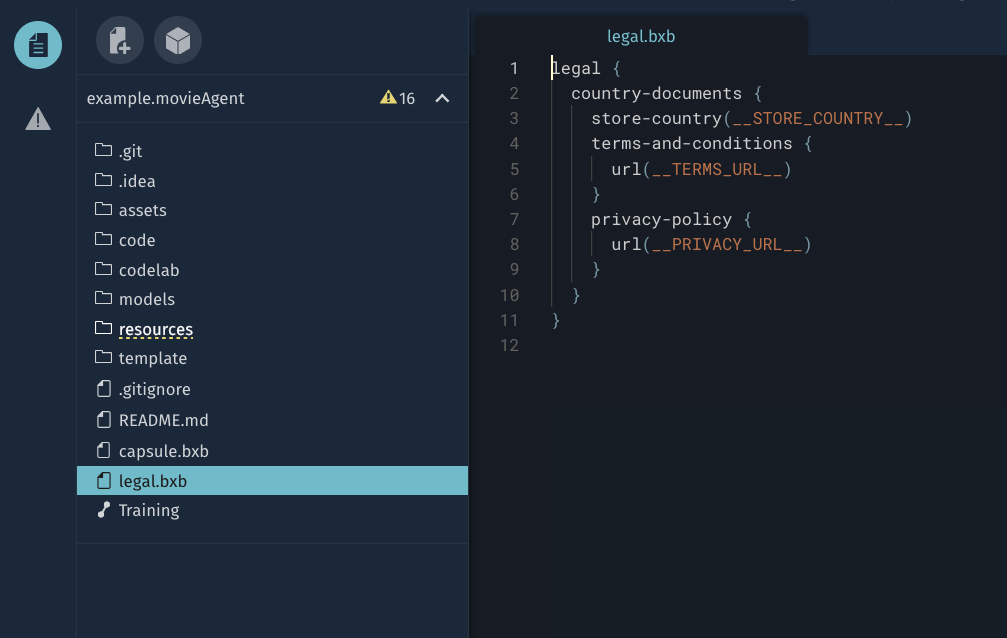 Welcome to v7.5.0, the 19T release of Bixby Developer Studio. This release contains a new feature for Stories and a few enhancements.

We've introduced an add button [+] between Story steps, which provides a new way to add more steps at a certain point in the flow. 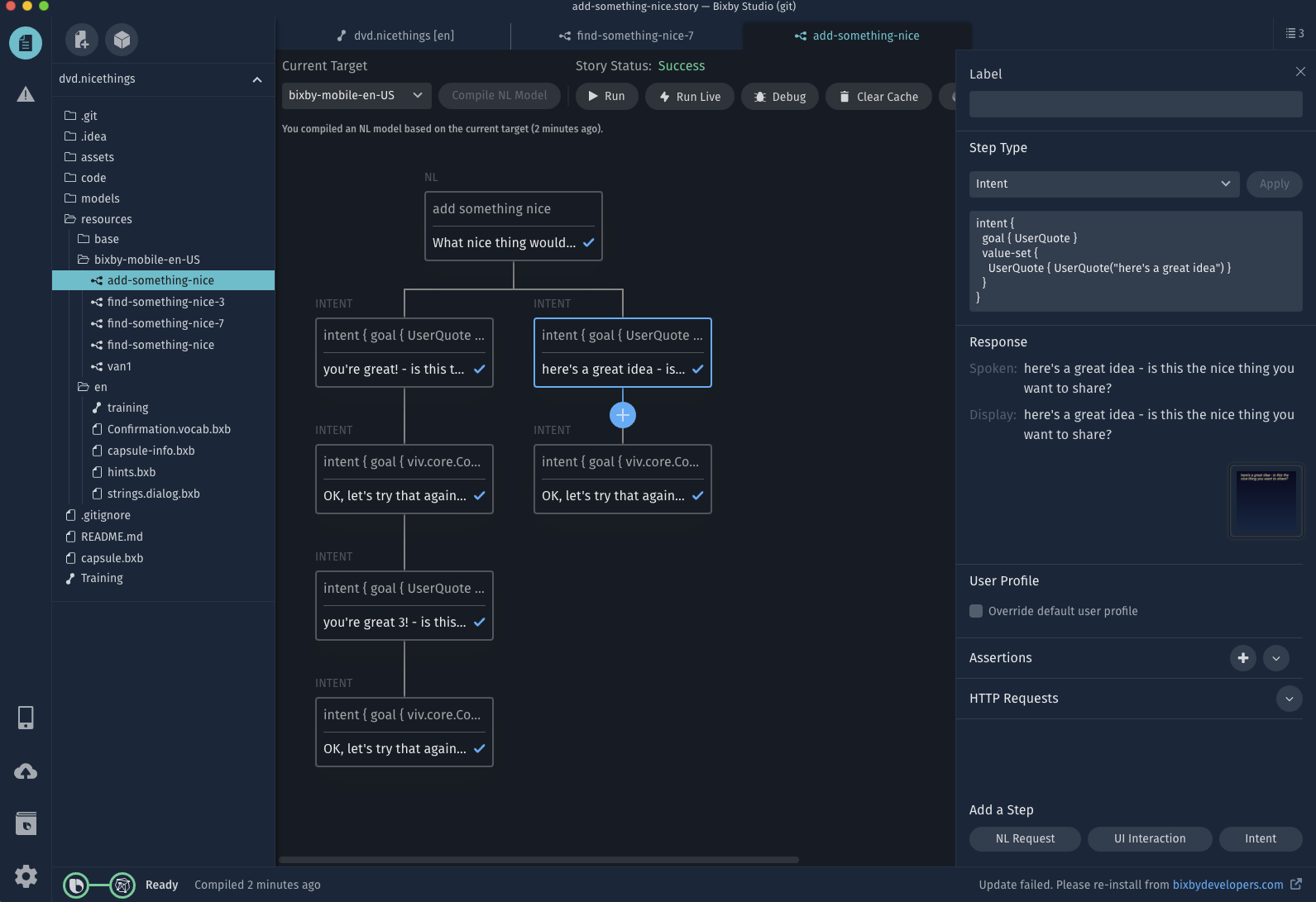 When you press the add (+) button, the Simulator opens, and the Simulator executes Story steps up to that point. The Simulator goes into Story Mode, awaiting further additions.

After you add steps in the Simulator, click the Save button to save the steps. Control then goes back to the Story window, where you see the newly added steps. 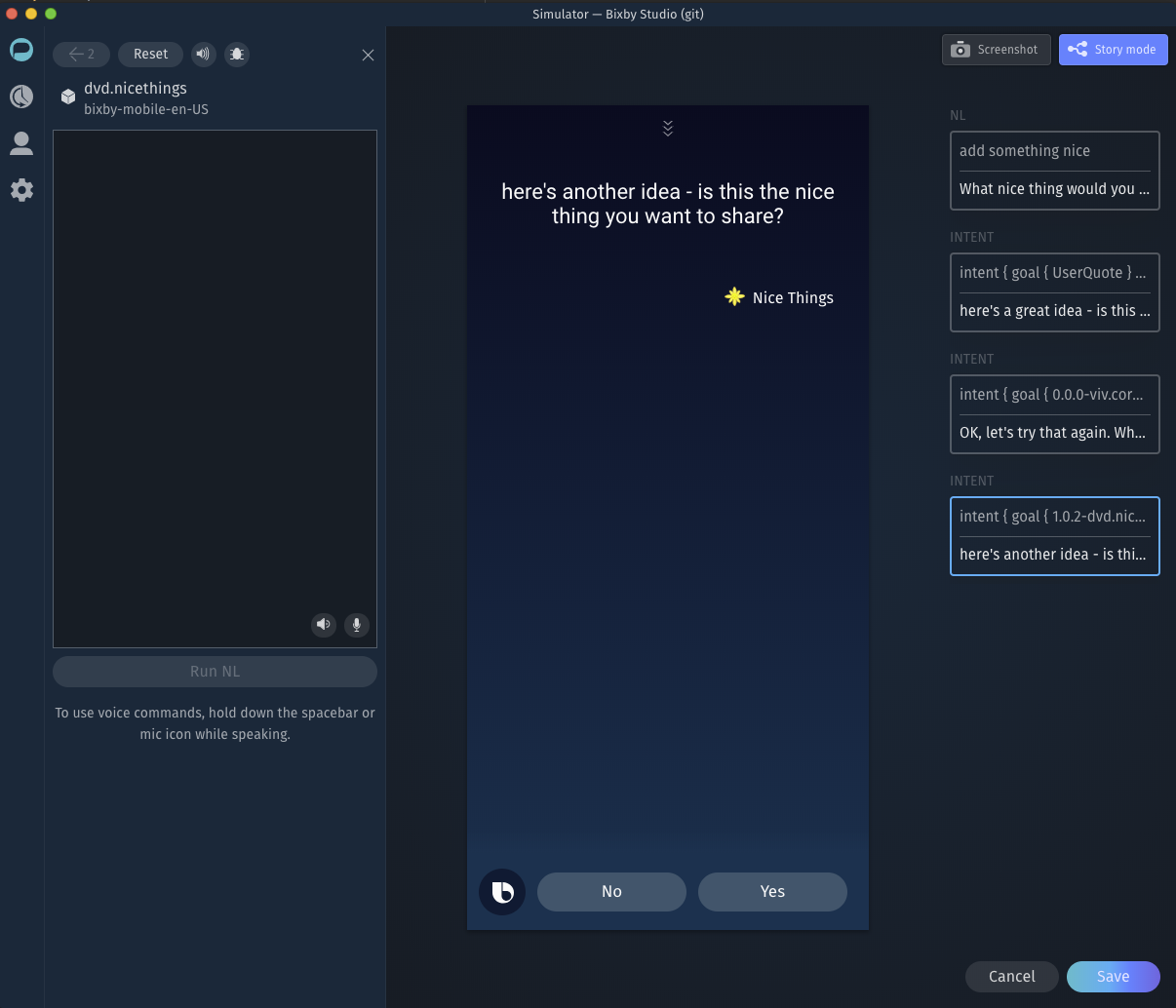 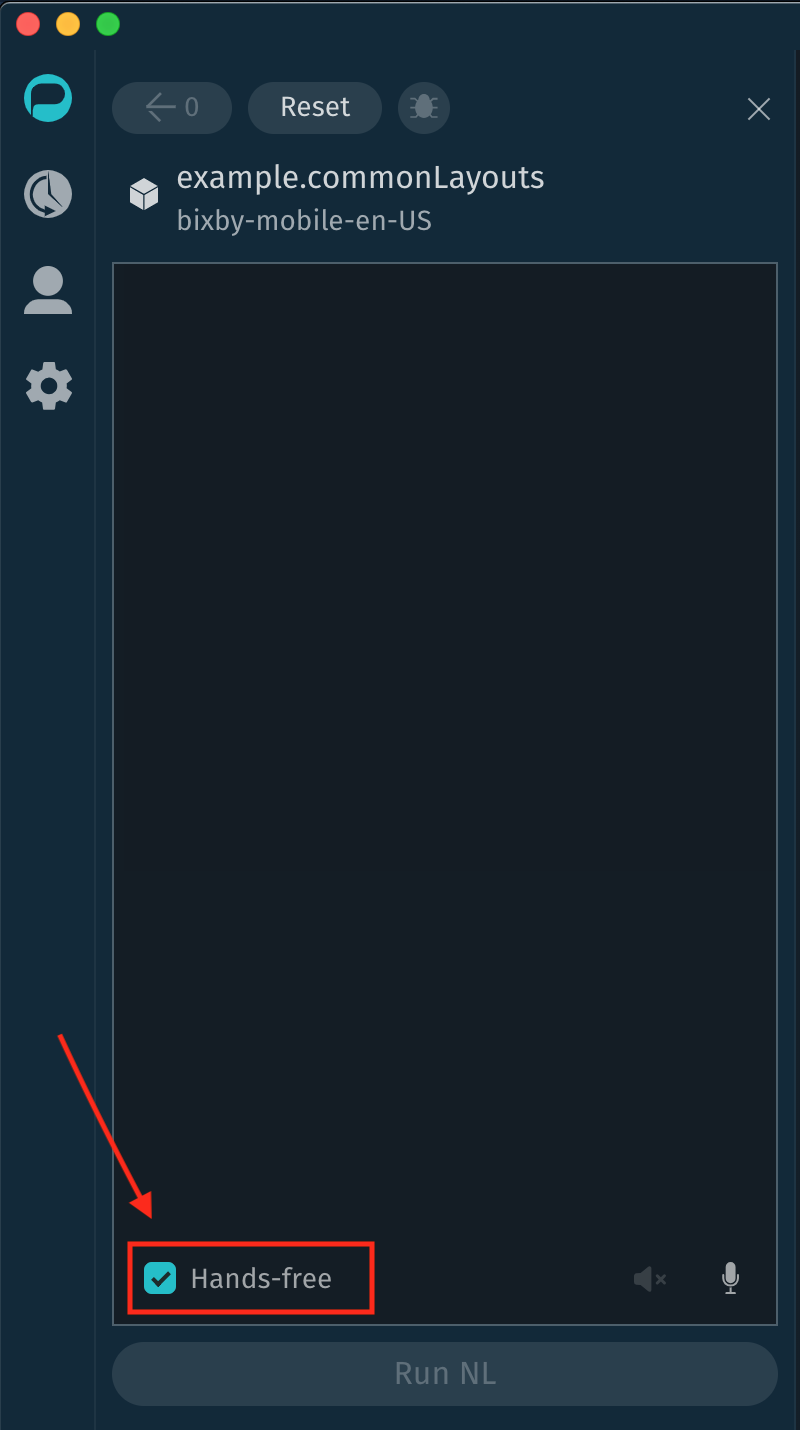 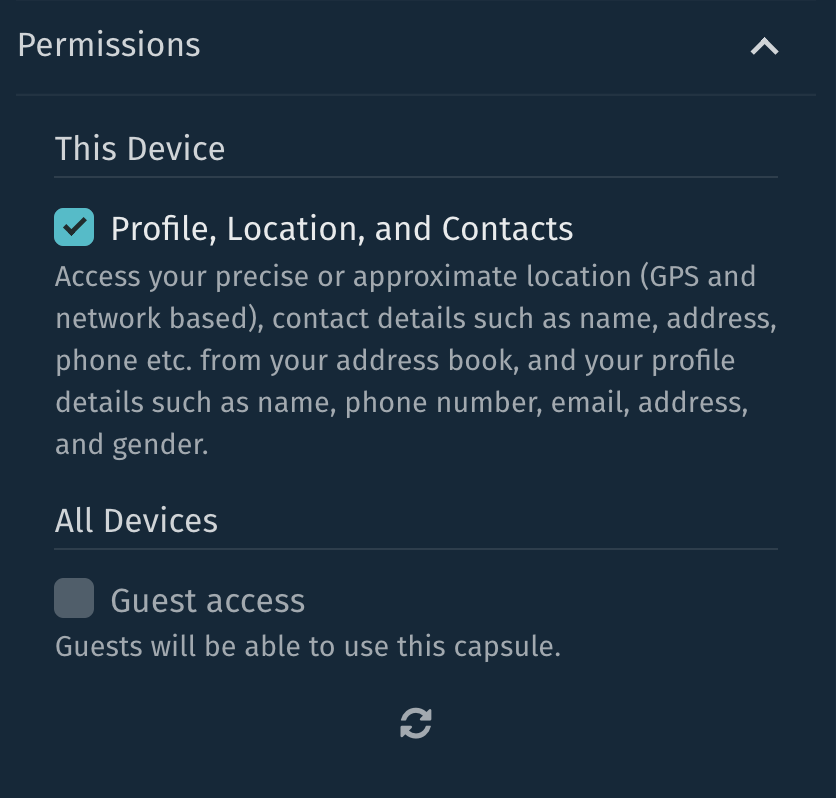 Show Links to the Deprecation Guides 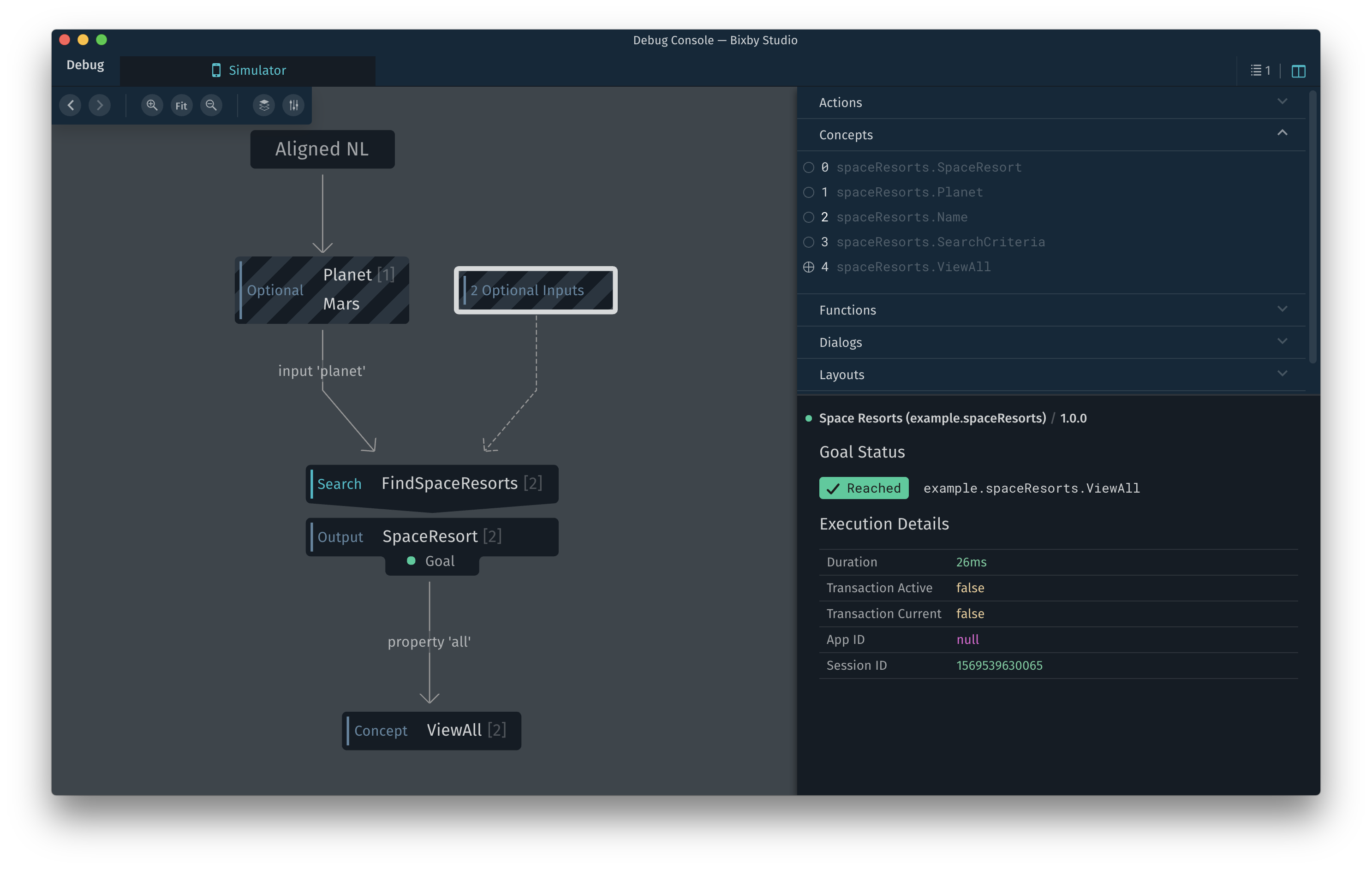