In Creating Bixby Views, we've seen how layouts are built from smaller components: cards, cells, and various text objects like titles and paragraphs. Let's go into more detail about layout components and their containers.

Input views can use layouts, macros, and layout components in certain places. However, input views have their own distinct set of components. For a discussion of input components, read the Input Views section, which links to further documentation on individual components.

Each section block can itself have just two child keys:

The content block within a section contains one or more view components, which are divided into the following types:

You can read the Designing with Bixby Views Design Guide and the Building Bixby Views (UI) Developers' Guide to check if your layout is using the correct components for that moment and that view.

Areas are static components that display information to users. The following *-area components are available, but no longer recommended. You can use a card when you need an area by using the appropriate card component without specifying the on-click key. For example, a cell-card without an on-click looks and works exactly like a cell-area.

The title-area key is also used within other components and should still be used as intended.

The paragraph and single-line blocks seem similar, but they have different use cases. A paragraph is a single unit of styled text that can be one or more lines, with wrapping left up to the display device. A single-line always displays as a single line of text, but can include spacers and inline images, letting you build a more complicated line of data. Note that if a single-line component generates more text that can be displayed on the device's screen in one line, it will be truncated with an ellipsis ("…").

Styled text blocks such as paragraph and text have two keys:

A card is a representation of a single subject or result: for example, a hotel room being booked, or a calendar event. Cards should always have title text, and usually have detail text (for example, a description of the hotel room). In addition, they might have image backgrounds, solid color backgrounds, image thumbnails, and even maps with pins. Most cards can have title-area components.

Also, see transaction components, which are variants of cells that allow input for use with transactional workflows.

Make sure that you are following the App Punch-Out policies if your card's on-click definition makes users exit Bixby.

Bixby Views has components to display a single image or multiple images in your view. PNG or JPG image types are recommended for all images.

For a single image, you can add a standalone image in a section's content container or in a compound-card. If you want to add an image with some overlaid text, use an image card. You can also add an inline image in a single-line if you need the image to be in the same span as text.

For a collection of images, you can add these components that allow the presentation of multiple images in carousel or list form:

Some images in your capsule, particularly icons, might not be visible or legible when set against a light background in Bixby's light theme. You can specify alternate images for the light theme by using the light-theme sub key under url (the image's default URL). There is also a corresponding dark-theme key that can be used if the default icon or image is more visible/legible in the light theme.

Images are only applicable to Result Moments and Confirmation Moments. For images in Input Moments, you can use an image-picker.

The partitioned component lets you present multiple rows or lines of data with visual separation between them. It can be used to present lists, tables, and grids.

A vbox container must be inside an hbox. You can think of an hbox as a row and vbox as an item in a column. The width of each column is determined by its content; Bixby will try to display the full content of each column. If there is not enough horizontal space to do so, left-aligned columns will be truncated with ellipsis marks (…); if there is still insufficient space, centered and right-aligned columns will be cut off (without the ellipsis to indicate truncation).

Use transaction components within transactional workflows. They allow users to confirm actions and prompt for selections. For instance, a reservation confirmation for a restaurant might allow the user to change the party size and the reservation time.

The cell-area and cell-card components have columnar slots for their content, numbered slot1, slot2, and slot3:

When you lay out a cell, you can choose to have one, two, or all three slots filled, but slot2 must always be filled. So there are four possible display options: 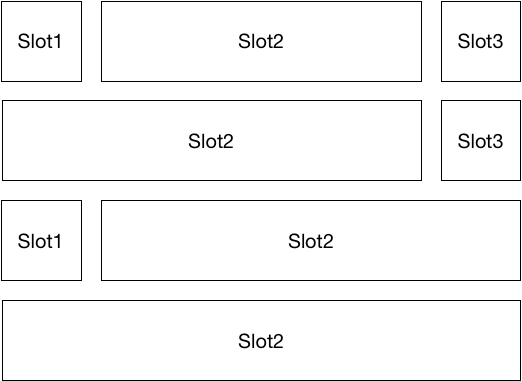 Use audio-control to create an audio media player component for a podcast, live stream, or audio track. The component can display album or show artwork, metadata such as title and artist, and interactive components to let the user control playback.

This component is only available on mobile devices. Media playing on other devices will use the device-specific controls, if available, to control playback and you will need to create a view for information to display.

Bixby Views offers limited styling of components that remain consistent with the rest of Bixby's design. All text blocks and titles can be given styles that control their size and, in some cases, a choice between normal and "soft" color. (The rendering of "Soft" styles is device-dependent, but generally has less opacity, giving it a dimmer or lighter look depending on its background.)

When styles affect size, they are listed from smallest to largest. All styling components will vary slightly on different devices and scale appropriately.

For a comparison of the styles below, see the text style reference page and the font references.

The Legal text style primarily should be used for legal content, such as copyrights, disclaimers, or terms of service.

For images that are in-line with other content either horizontally (single-line) or vertically (vbox), image sizes can be set to any of the style names for Title and Detail. The image has the same height as the font size of the specified style. You should match image styles to the styles of their accompanying text, although the _Soft suffix will not affect the image's display.

These ratios only apply to mobile. Image ratios on watch devices are fixed.

Additionally, you can change the position and alignment of some images using the following keys:

If you need to make an image tappable and show it in lightbox mode, you can use the lightbox-enabled key to indicate to the user that the image is tappable.

For a comparison of the shapes, see the shape reference page.

You can specify the following aspect ratios for the map-card and image-card. For a visual comparison, see the aspect-ratio reference page.

You can add a divider between content child components in compound cards and in section content components.

If you want to know which components to use during which moment in your conversation flow, you can read the Designing With Bixby Views guide.

If you want to know the design specifications of the various components, you can read more in the Design Components Design Guide and play with the interactive demos available.