The Import and Search capsule template allows you to construct capsules that allow users to query underlying data tables through natural language. The queries can be relational, linking a main data table to supplementary data tables: a movie information capsule, for instance, could have a table of movies and a table of actors, letting you train it on such utterances as:

In the example for the movie information capsule, a movies table might have the following structure:

The Import and Search template can infer that the actors column in the movies table refers to the actors table. Since movies have multiple actors, this column contains array values linking to the actors by ID.

The actual "Movie Agent" sample data is generated from The Movie DB, and can be regenerated by a Python script included in the sample repository. The URLs for poster and profile images in the actual sample data are complete, working URLs; they're abbreviated here in the documentation for readability.

There are conventions you must follow when creating CSV files for the Import and Search template, as well some special syntax you can use to tweak how Bixby Developer Studio maps the table content to concepts.

The movies table above looks like this in CSV form:

First, here are some general guidelines:

To show how column names and data are used to derive column types, take the following example of a Hotel concept:

By default, properties in generated models are given default cardinality of min (Optional) and max (One).

You can add a prefix character to column names to control input cardinality:

You can add a suffix character to column names to control output cardinality:

In the hotel example, the Amenities column has a min (Optional) max (Many) cardinality, and is prefixed with *. It also has array values in that column, which means it requires an output cardinality of max (Many), and thus is suffixed with * as well.

You could make HotelName a required output by appending a ! to its column name:

And you could make all the properties required by prepending ! to the single-value ones and changing the * prefix to + for Amenities:

In practice, only inputs that are truly necessary for every search query should be set to a min (Required) input cardinality.

Since they contain commas, array values must be quoted in the actual CSV file. See the example in Cardinality above.

Columns with array values must be suffixed with * or + to set their cardinality to max (Many). Otherwise they will default to Max (One), and the whole quotes text will be interpreted as one value, such as the actual text "pool,jacuzzi", rather than as multiple values!

If you have a column that's mapped to GeoPoints and contains latitude/longitude coordinates, the details view for those entries will include a map. Tapping on the map, or asking Bixby to "get directions", will open Google Maps with the appropriate point selected.

Values in a GeoPoint column must be latitude/longitude pairs inside double quotes and separated with a comma. For example:

Depending on your data sets, your capsule might need to handle queries that allow filtering based on values, similar to an SQL WHERE clause:

The Import and Search capsule template can generate models that handle these cases for you by using filters.

To define a filter, append a [filter] tag to a column heading, such as:

Use [filter=filter1:filter2:...] to specify filtering operations that are allowed on the column. The available operations are:

The available filtering operations are dependent on the column:

You can control whether the data from a column shows up on summary or detail cards by appending [display=...] to the column name.

Note that a summary view is not guaranteed to have enough room to show all columns with a summary display target, as there is limited space available.

If a display target is not specified for a field, the template generator will use internal heuristics to decide which views those values should be displayed in.

Each column can have a label suffix to specify singular and plural forms for that column in the capsule's output language, of the form [label=singular:plural]:

This label is required for non-English languages. If you supply only one form (as in [label=Hotel]):

If you need to specify multiple directives in brackets, they should appear one after another with no space between the brackets, such as: 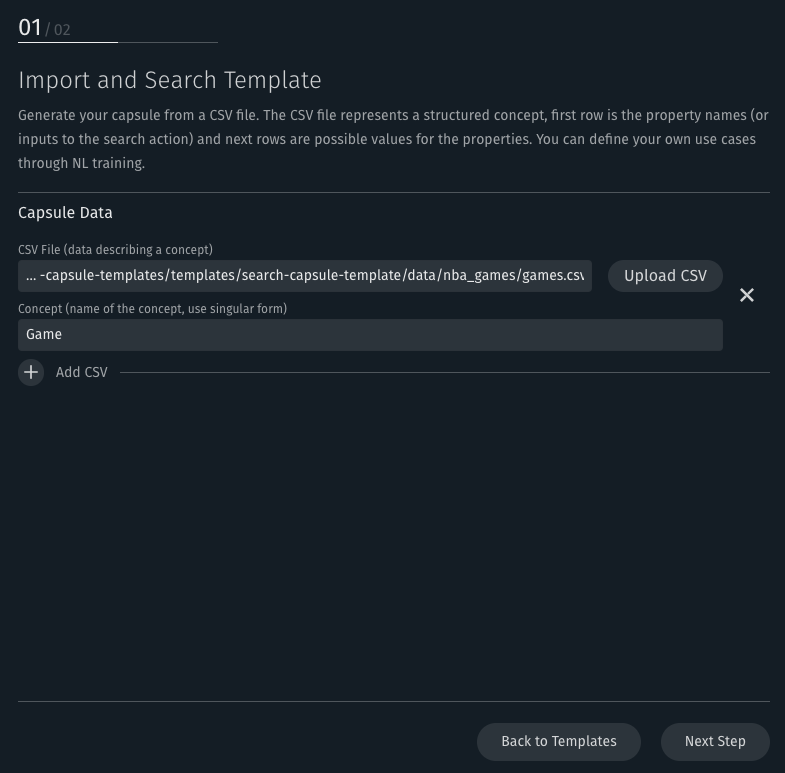 After the capsule is generated, Bixby Studio opens the README file for your newly created capsule, with information about what models and basic training it's generated, along with some advice about next steps.

You can download sample CSV files for a variety of possible search capsules, including the NBA teams and schedules example, at the Bixby Developers GitHub repository.