The Bixby viv.money library capsule provides a set of concepts and actions that allow your capsule to handle currency and prices.

This reference lists out several of the models available in this library capsule. Some sections contain tables listing information about those concepts or actions.

The primary models are viv.money.Currency and viv.money.Price, which extends Currency. They are nearly identical structure concepts with two properties:

The currency value $5 would be represented as a Price model with the following values:

The difference between Currency and Price is that Price adds a natural-order key, which causes Price instances to be sorted by their value. If your capsule involves products, services, or other models with pricing, use Price rather than Currency.

Products with ranges of prices can take advantage of the PriceRange model, whose two properties are min (a MinPrice concept) and max (MaxPrice). MinPrice and MaxPrice both extend and have the role-of the Price concept.

As with many Bixby library capsules, viv.money can infer information based on context. For instance, currencyType will default to the currency of the user's locale.

To tag currency values in utterances, you will typically tag the CurrencyValue and either the PrefixSymbol or CurrencyCode separately, then assign them a role of one of your capsule's models that extends either Currency or Price.

For instance, the viv.gratuity capsule, which computes tips and splits bills, might be trained on the utterance "what is an 18% tip on a $55 tab?" You would tag $ as viv.money.PrefixSymbol:$ and 55 as viv.money.CurrencyValue, then tag $55 with the role viv.gratuity.ServiceBillTotal. 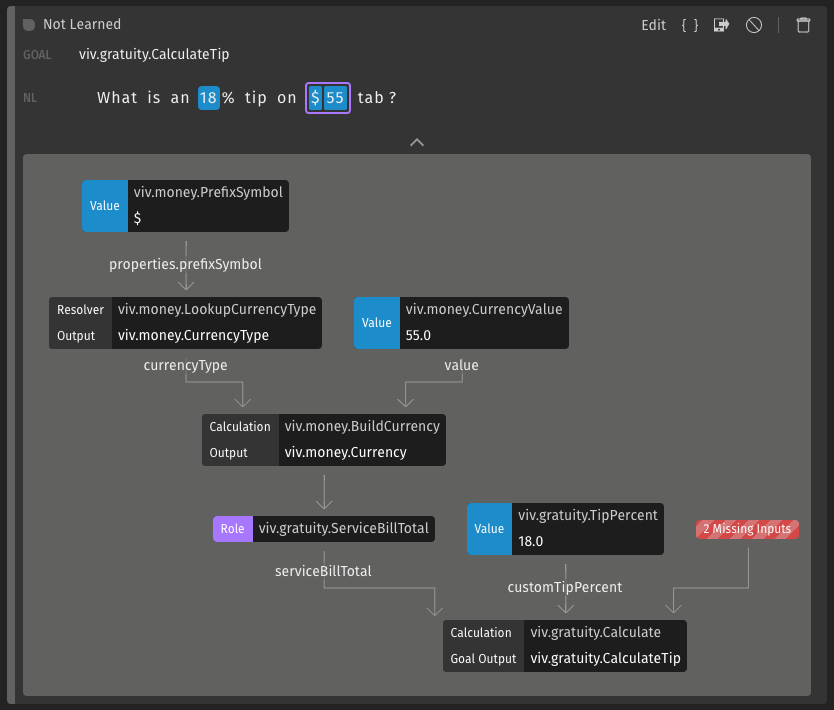 The Aligned NL for this query would be:

For price ranges, train on MaxPrice or MinPrice. For instance, a flower shop capsule might be trained with the utterance "find me roses under $70". In that case, you would tag $ as viv.money.PrefixSymbol:$ and 70 as viv.money.CurrencyValue, then tag $70 with the role viv.money.MinPrice.