In this guide, you'll learn about the following:

You can add or edit voice actions for devices with metadata submissions. Once you create a new metadata file or update an existing one, you can submit your metadata file for publishing and release approval, and track its progress.

On-device testing and submissions of metadata for voice commands are only available to device manufacturer developers who have registered their device with SmartThings. For more information, see the Start Developing guide on the SmartThings Developers website.

BHS enables you to create new metadata or update existing metadata with the icons in the Metadata Sidebar. 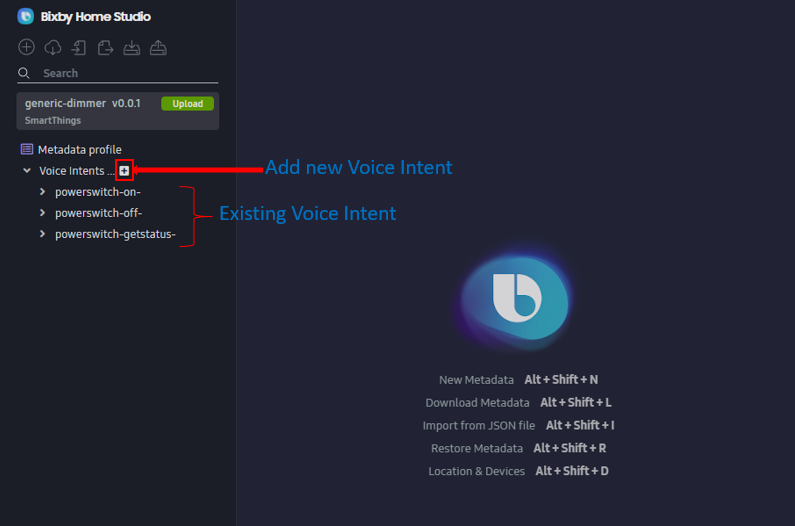 You have three options for editing voice intents. Once you've done at least one of the following, you can submit your metadata for approval:

to the right of Voice Intents in the Metadata profile section.

A pop-up appears, as seen below. Select a category from the drop-down menu, and then select a voice intent from the list that appears. Click ADD.

The added voice intent appears in the list under Metadata profile in the Metadata Sidebar. 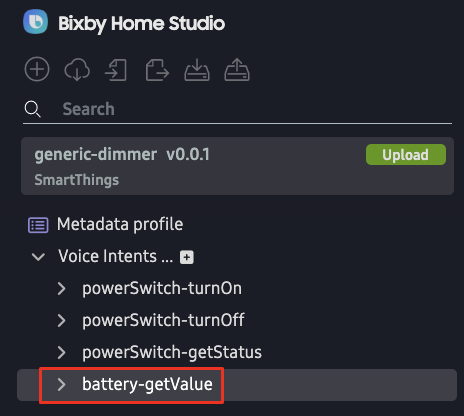 After adding the new voice intent, you can update the graph for this voice intent and then proceed to submitting it. For more information on adding to this graph, see Creating an Action Flow in the Bixby Home Studio Basics guide.

To update an existing voice intent, click a voice intent under Metadata profile to open its metadata information.

To make changes to the capability information for a device, click Property under the selected voice intent.

To make changes to a graph directly, click Graph under a voice intent.

To make changes to the JSON for a graph, click RAW in the top right corner.

In the pop-up, make changes to the raw JSON and click ADD. 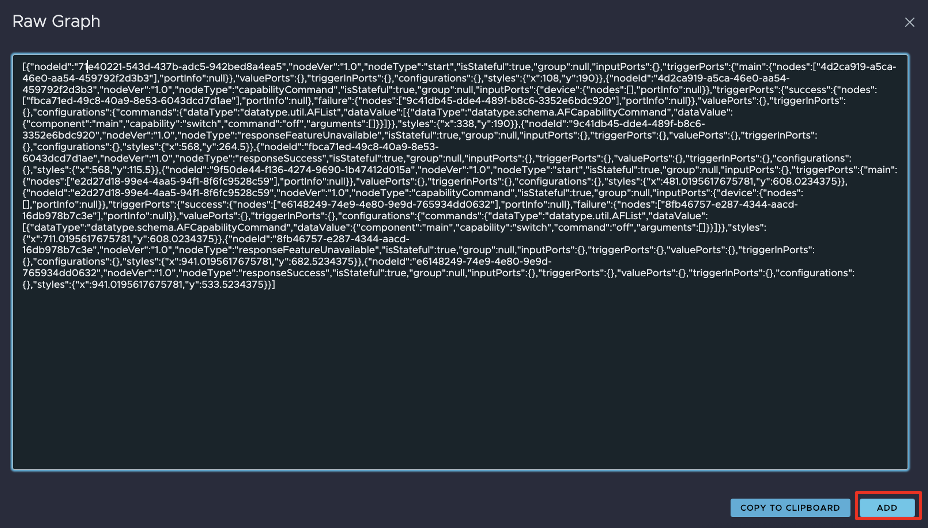 To delete an existing voice intent, right click the voice intent. Then, click Delete "%voice intent%". The below example deletes the "powerSwitch-turnOn" intent.

Now that you've created new metadata or updated existing metadata, you can submit your metadata for approval for publishing and release:

Next, you'll decide whether to test your metadata or skip this step before submitting.

A pop up appears that shows the steps to submit your metadata. You have two options:

Testing before submission allows developers to discover and fix errors. It also helps the Bixby Home Platform team verify that the metadata will not affect platform stability.

To submit metadata without testing it, click SKIP TESTING AND SUBMIT.

A Metadata Submission Message pop up appears. Add a message about the submission that explains what has changed since the last transition in submission state. Click SUBMIT. 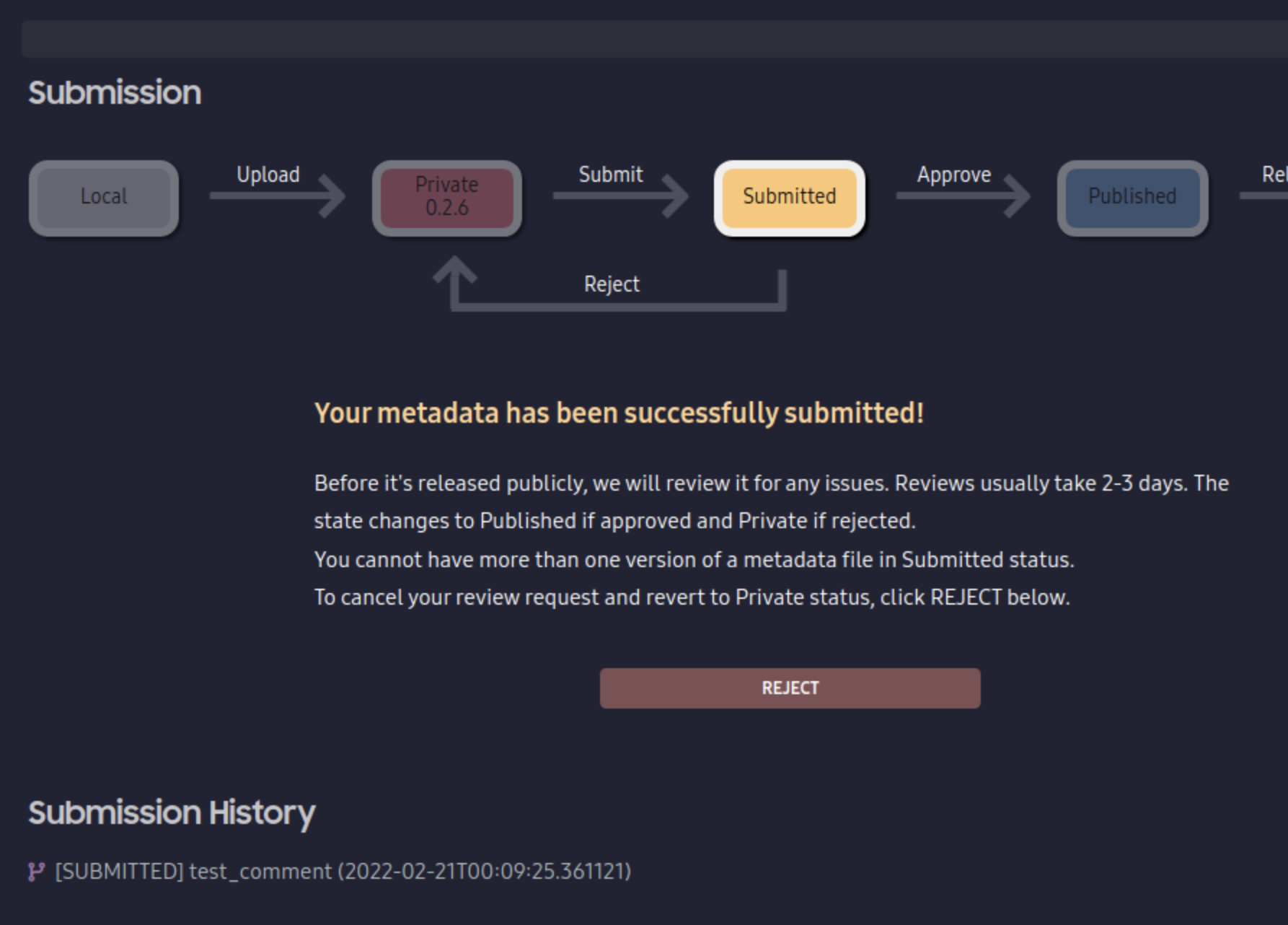 While you can skip testing if you've tested it thoroughly on your own, it's still recommended to perform testing here as well.

You can verify the metadata before submission:

Whenever a user changes the submission state of the metadata, a message (log) prompt appears. When you're changing the status of your submission, the message you submit should give information on what has changed in the metadata.

The recipients of your message will also differ depending on the transition state:

The release manager writes a message to the members of the device manufacturer's team for the following transition states:

If updating existing metadata, your version number must be higher than that of the original file before submitting. Also, you cannot have multiple versions of the same metadata file in the Submitted state at the same time.

There are five submission states:

To view submissions in specific states, select one or more states at the top of the Submission sidebar. You'll see a check mark on the selected states. 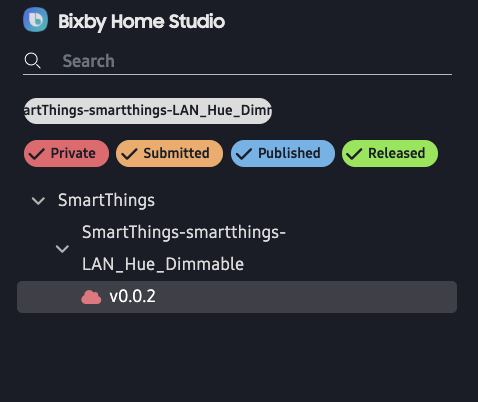 In the next guide, you'll learn how to perform Data Conversion Using a JSON Query Node.