In this guide, you'll learn how to use the following:

Let's design an action flow for the voice command:

"What is the power status of the bulb?"

You must get the status of the device (whether turned on or off) and give the user this information. The PowerSwitch Status voice intent enables you to do that. 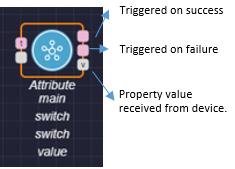 To add this to your action flow: 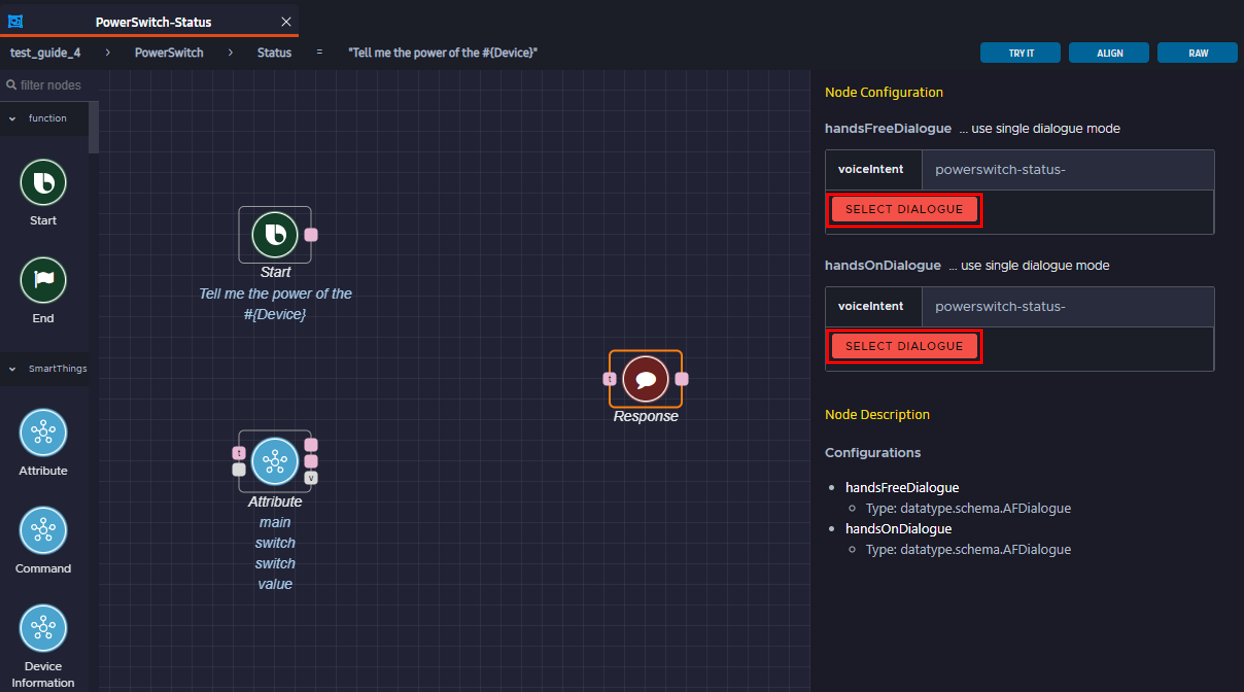 Each possible dialog response consists of a template and the values to fill in. The Response node has to be configured for dialog in both hands-free and hands-on scenarios. These scenarios are chosen based on the device Bixby is speaking from.

Once the node is configured, the node's ports are automatically reflected with parameters according to the dialogue chosen.

In this case, the Capability parameter is automatically filled by the editor as shown in the Node Configuration menu, so there is no corresponding port to the node.

The Information parameter is to be sent as a value to the input port through a data-path. 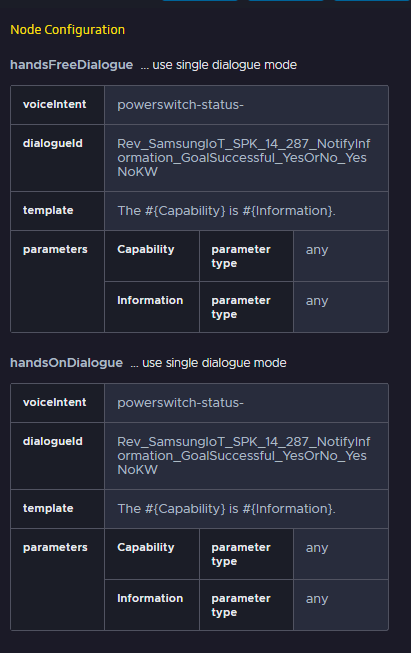 Now that you have a node which can make Bixby reply with a dialogue, all that is left is to pass the on/off value to the dialogue.

An initial guess might be to directly feed an "on/off" string to the input port of the Dialog node. But the Response node directly replaces the parameters with the values passed to the node, so you need to ensure that the values are consistent with the user's language. To support multiple languages, Bixby Home Platform uses Vocab (vocabulary).

The dialog's language is automatically chosen at runtime according to the user's settings, and the parameters of a dialog are replaced directly in the dialog's template in that language to make a coherent response to the user.

The Vocab Conversion node essentially maps a key to a particular "Vocab" (predefined vocabulary, to be precise). When a key is passed to this node as input, it returns the corresponding vocabulary as output through it's node value output data-port.

In this case, the possible keys as input are either 'on' or 'off'.

If the bulb's power status is 'on', this value goes into the Vocab Converter node as a key and gives the corresponding vocab, which is then passed on to the Response node as a parameter to be replaced in the dialogue at it's placeholder.

This ensures that 'on' is translated appropriately into the user's language and the dialog is coherent.

Why not connect the Start node to the Attribute node's trigger-port and have execution paths in a linear fashion as shown below?

This will work for the desired behavior, but this graph behaves differently with respect to when to fetch the value of the attribute:

When the Attribute Node is used with a trigger in the execution path as shown above, the value of the configured attribute is fetched at runtime. Using SmartThings Attributes with triggers potentially adds to the overall execution time of the action flow, increasing the overall latency of the command execution. When the Attribute Node is used without an execution path at its input trigger port, Bixby's backend prefetches the value of the attribute before the action flow is run.

So, while the above action flow is valid, it's not as efficient as the first action flow. It's suggested that you use triggers on Attribute nodes only when absolutely needed.